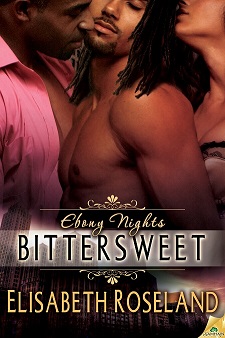 She’s the one they’ve waited for. But they may have waited too long…

Carla Dabrowski thought a kinky affair with her boss would provide the thrill she’s been missing. What a mistake. Not only is her desperately needed factory job at his mercy, she’s still got a lonely hole in the middle of her life.

That’s when a friend pushes a black business card into her hand, and Carla finds herself opening the door to a whole new world of possibilities—courtesy of two hunky, handsome escorts.

It was just another job for Derrick and Andre. But the moment they enter the darkened home that once belonged to Carla’s parents, they feel a powerful emotional pull. Unfortunately, the guys know the cardinal rule of escorts. Keep it strictly business—or risk losing the job that pays the bills, but lately has left them questioning their lives and futures.

As the three of them dance around the edge of commitment, only one thing holds them back. Fear. Until one brutal encounter with the past threatens to destroy all hope of a happily ever after times three.

Contains two close-to-retirement-age professional escorts (Yeah, like 30? That’s old…), and a melancholy redhead with a longing for something sweet, dark, and chocolaty.

Carla decided to forgo her usual seat at the bar in exchange for a table in the corner. There were three chairs, and she kicked nervously at the leg of one of them while she kept her eye on the door. Roscoe’s was her favorite after-hours hangout spot. All of the tables and chairs were worn and scuffed, the wood etched with the markings of decades of beer bottles and shot glasses. On the walls hung old construction photos of workers swinging from beams as they erected some of the city’s most famous skyscrapers. Rumor was that those same workers used to blow off steam at Roscoe’s after they punched out, raising a glass to the fact that they survived another day dangling in the air. One wall featured a new picture of Chicago’s masterpiece, with the words “Willis Tower” printed underneath it. Someone had drawn an angry red line through “Willis” and scrawled “Sears” in its place.

Roscoe’s was a good choice as a meeting place. Besides being close to her house, the beer was cold and cheap—a necessity after blowing a few hundred bucks on one night. She hoped it would be worth it.

The receptionist had asked her a lot of questions and given her a lot of choices. None of them really mattered to her, so she only made one request—that they be in their twenties. As she sat nursing her Miller Lite, the front door swung open and two of the most gorgeous twentysomethings she’d ever seen stepped into the ramshackle establishment. They both spotted her immediately, which wasn’t difficult given that she was the only redhead in the bar. The receptionist had asked what she would be wearing, and since Carla’s idea of planning her wardrobe meant picking out something clean, she had simply told the woman on the phone that she had red hair.

“You must be Carla.” The guy on the left smiled and extended his hand. “Hi. I’m Andre.” Unable to speak, she simply shook it. His grasp was firm. “This is Derrick.” Derrick’s grip was as inviting as Andre’s.

They were both tall, but that was where the similarities ended. Derrick had golden-brown skin and short hair. His hazel eyes gazed warmly down at her. Andre had dark-brown skin and eyes, and his shoulder-length dreads were pulled back neatly into a ponytail. Perfect. Let’s do this.

“Whoa. What’s the rush?” Andre took her by the elbow and gently guided her to sit back in her chair. “We’ve got all night. Let’s talk first. Get to know each other.”

Carla’s seat squeaked as she plunked down. “Oh, right. Heh. Talk. So, I guess that’s part of the package too? Talking. Cool.” She ran her fingers through her hair, wiping away the beads of perspiration at her temples. She cleared her throat. “Can I get you a beer?”

Derrick smiled at her. “Let me get it.”

“It’s not, but the drinks are cheap, and on Saturday nights they have a band that’s not too terrible.”

Andre chuckled. “Well, ‘not too terrible’ is a step up from excruciatingly awful, so that’s a start.”

Derrick returned to the table with two bottles. They all took a drink and sat for a moment in silence. Derrick put his bottle down and leaned forward in his chair, his eyes sparkling.

“I work the line at a candy factory.”

“You’re kidding me, right? It’s a bullshit job and I hate it. But it pays the bills.” The men laughed.

“Yeah, we all gotta do it.” Carla thought she saw something flash in Derrick’s eyes, but a second later, it was gone. “And what about you all? How long have you been…uh, doing this?”

“Three years.” Andre’s large hands rested comfortably on the table. She wondered if he knew what to do with them.

Andre moved his leg and pressed it firmly against hers. It was solid and awakened the desire in her belly. “We do like it. Mainly because we get to meet beautiful women like you.”

“You’re good.” She turned to Derrick. “Is he always this good?”

“Oh, just wait. He gets even better,” he said. The desire erupted and sent tingles of pleasure throughout her body.

“I’ve got a million of them.” Andre’s charming grin made Carla want to quit the chitchat and move on to the more physical part of the evening.

Derrick continued, “So, you work in a candy factory. And what else should we know about you? Are you from this great city of ours?”

“I could give you about a hundred reasons, including, but not limited to, the architecture, the food, the museums, the fact that there’s not an abandoned building on every corner…” Andre ticked off the points on his fingers, “…but then again, I’m from Detroit, so everything is relative.”

“Detroit, huh? So what brought you here?”

“Have you ever been to Detroit?”

“Well, if you had, you wouldn’t have to ask that question.”

Carla snorted. “Fair enough.” She turned to Derrick. “What about you? You from Detroit too?”

“No, I’m from here. The south side. Actually, not too far from this neighborhood.”

“So you know about the crime, the no jobs, the high taxes—”

“And the architecture, the food, the museums,” Derrick continued. “But you’re both right. Chicago’s got its positives and its negatives. For some people, the city is everything they had hoped for, and for others, it hasn’t quite lived up to expectations.” Sadness passed briefly across his face as he took another drink.

“Well, speaking of hopes, what are your hopes for this evening?” Andre asked.

“I mean, why did you call Ebony Nights and request both of us? Usually one of us is enough for any woman.” A smile teased the corner of his mouth.

“And you haven’t found that? With anyone?” Derrick asked.

“It sounds like you’ve had a series of boring lovers,” Andre joked, but his dark-brown eyes were full of concern.

“Boring? Yeah, some of ’em. Others were selfish, or didn’t know what I liked, or couldn’t do what I liked.”

She shrugged. “I like a lot of stuff. I don’t know. Stuff that feels good.”

“Hey, it’s okay.” Derrick touched the back of her hand. His fingers radiated warmth and kindness. “You can tell us. Be specific. We’re here to please.”

Andre pressed his leg even more firmly against hers. “Absolutely. We want to make sure that you have a great time tonight. Something that you remember later.”