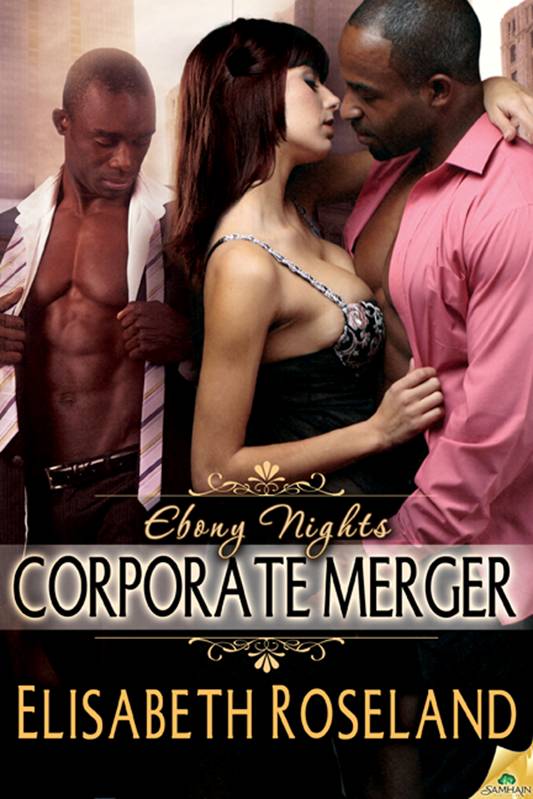 The cure for terminal nerdiness…three drops of dark chocolate Cupid.

Amy Connelly has gotten used to the taste of shoe leather. Every time she opens her mouth to talk to gorgeous co-worker Eric Lewis, she puts her foot right in it.

Tired of the painful sight of her turning into a hopeless motormouth or tongue-tied fool at Eric’s approach, Amy’s friends take steps to remedy the problem. Her thirtieth birthday present is three desensitization dates with Derrick Vaughn, an Ebony Nights escort and an Eric look-a-like.

It’s magic. Communicating with Derrick is easy, especially when it’s their bodies doing the talking. He’s even helped her rediscover the kinky side she’s repressed for so long.

Eric? That’s a different story. She’s failed miserably at two of Derrick’s three assignments for her—asking Eric to lunch and dinner—thanks to a meddling, flirty co-worker who’s suddenly vying for Eric’s attention. If shy, awkward Amy is to have a chance, she’ll have to kick it up a notch…or three.

Warning: This book contains an awkward motormouth heroine, a painfully shy hero, and a sexy male escort who knows how to set them on the course of true love.

“Okay, on the count of three. One.” Annette lifted her shot glass, and everyone else did the same. “Two.” She licked the salt off her hand. “Three!”

Amy grimaced as the tequila burned its way down her throat, and she quickly chased it with the sour lime in an attempt to put the fire out. “Ack.” She shook her head forcefully and slammed her glass down on the table, knocking over several empty ones as she did so. “Whoops!”

“Careful!” Jill yelled. It wasn’t loud enough in the club that yelling was necessary, and in fact, their private table provided refuge from the pounding techno music, but Jill yelled nonetheless. “You almost spilled that all over my new dress!”

“They’re empty. All eight hundred of them.” Amy waved her hand over the top of the table. “Empty.”

“Oh, right.” Jill laughed, surveying the evidence of their celebration.

“Hey.” Amy looked around at the reveling partygoers, the dance floor partly tilting on its axis, thanks to all of the tequila. “Where’d Denise go?”

“She went to get your present.” Pia’s eyes flashed with glee, cranked up a notch by too many shots.

“Well, finally.” Amy sat up and craned her neck. “I’ve been waiting all night. How big is it?”

“About six feet.” Annette snorted, and Jill and Pia cackled.

“What? What the hell are you talking about? Come on and tell me. What did you get me?”

Amy turned to follow Pia’s gaze. She saw Denise approaching the table empty-handed. “What? Where is it? Denise!” She raised her voice. “I thought you said you were going to get my present.”

“I did.” Denise grinned broadly and gestured behind her. “Amy, this is Derrick. Derrick, this is Amy, the birthday girl.”

Standing next to her was one of the most gorgeous men Amy had ever seen. He was tall, with a lean build and broad shoulders. The top buttons of his black shirt were undone, revealing a few inches of brown skin. His dark hair was cut close, and when he smiled and extended his hand, Amy found herself sucked into his hazel eyes.

“Hi, Amy. It’s nice to meet you.” His smooth, rich voice came pouring out of his full lips, which then parted in a perfect smile.

Amy knew her mouth was open. She could feel the club’s alcohol-soaked air swirling around, drying out her tongue, but she couldn’t close it. Nor could she control her limbs to shake his hand. All she could do was stand there, staring at him. This man. So similar in many ways to Eric that they could be cousins. Brothers, even. This man. This…present?

Denise shooed Jill out of her seat and ushered Derrick forward. “Girl, get up, make some room. Amy, close your mouth. You’ll catch flies that way. This is Derrick.” She swept her hand grandly over him from head to toe. “Your present.”

“Ta-da!” Annette gestured toward him. “Surprise!”

“And his name is Derrick! Can you believe that? That is so close to Eric. So close!” Pia almost fell out of her seat giving Amy this information.

Now next to her, Derrick wrapped his arms around her and gave her a gentle squeeze. Amy could smell his cologne—fresh and clean. He pulled back slightly and kissed her softly on the cheek.

Amy finally managed to close her mouth and swallowed hard to reactivate her tongue. She looked around at all of her friends who were staring at her with looks of anticipation and glee. Amy slowly shook her head. “I don’t under—”

“So, here’s the deal.” Denise reached forward and picked up her half-consumed martini. “Derrick is an escort. We have purchased his—ahem—services for you for your birthday. So enjoy.” She winked and took a sip from her glass.

“Escort?” Amy looked at Derrick, whose handsome face was so very close to hers. Those eyes. “Services? What does that mean? Services?”

“It means…” Derrick snaked his arm around the back of her chair and leaned into her, “…I’m your date for the evening, and I’m here to make sure you have a good time.” His leg was pressed against hers, warm and solid. She began to feel a tingling between her legs, and it wasn’t from too much tequila.

“Yes.” A smirk touched the corner of his mouth. “A very good time.”

The similarities were striking, but Derrick had replaced Eric’s corporate politeness with sheer, raw sensuality.

“Happy birthday, chica. Enjoy him.” Jill sat back and crossed her legs, revealing a few more inches of skin. “I know I would.”

“Where in the world did you find him? Oh, I’m sorry…” Amy met Derrick’s hazel eyes momentarily, “…I don’t mean to talk about you like you aren’t here.”

Derrick chuckled, and the low, sensual sound travelled down her body, causing her to grow wet. Amy shifted to make herself more comfortable, and in response, Derrick slowly began rubbing her back.

“It’s no problem. I’m sure this comes as a surprise.” His touch felt good, and Amy couldn’t stop herself from leaning back into him.

“It was Denise’s idea,” Annette said.

Denise nodded. “I know about this escort service that specializes in black men, and seeing how you have a little thing for Eric but can’t seem to sound like an intelligent person around him, I thought what you could really use was a little company with a man who shares many of Eric’s attributes.” She gestured around the table. “Convincing them to go in with me on your present was easy.”

“We thought it was a great idea.” Pia seemed relieved she no longer had to keep the secret.

Amy grinned. “Oh wow. Uh, this is a little weird since no one has ever bought me a man for my birthday before. Because really, who buys people as birthday presents? But wow, this is so great. Thank you.” She looked at Derrick again. She wanted to stroke his chiseled jaw with her hand and kiss his full lips. Whether this was fueled by sexual desire, tequila or the generosity of her friends, Amy didn’t know, but as the end of her thirtieth birthday approached, she really didn’t care.

Buy Advertising for Love on the Samhain website, Amazon, or Barnes and Noble.